Zhongyang construction contributes to cultural exchanges between China and the UK

Zhongyang construction contributes to cultural exchanges between China and the UK Jeremy Wright said in his speech that the Peony Pavilion is more than just a building. It is a fitting symbol of the close ties and cooperation between China and the UK. Although Shakespeare and Tang Weng did not know each other at the time and were thousands of miles apart, they were contemporaries. Bridging the gap between the world's two great writers is a noble goal, and the peony Pavilion will play a huge role.

Hu sishe said in her address that the Chinese people's association for friendship with foreign countries will continue to adhere to the spirit of extensive consultation, joint contribution and Shared benefits, actively participate in the "One Belt And One Road" cooperation, and pave the way for promoting exchanges and cultural exchanges between China and the rest of the world. 2019 marks the 70th anniversary of the founding of the People's Republic of China and the 65th anniversary of china-UK charg d 'affaire diplomatic Relations. It is also a year of deepening china-UK "Golden Era". Let us seize the opportunity and contribute to the sound and stable development of China-UK relations and the building of a community with a Shared future for mankind. Xiao Yi pointed out in his speech that drama is a treasure of Chinese culture and the pavilion is a classic of Chinese architecture. The Peony Pavilion is a representative symbol in tang Xianzu's classic play, the Peony Pavilion, as well as a representative symbol of Chinese culture. It integrates excellent Chinese operas with traditional architecture, and fully expresses the Chinese culture with a long and glorious history. Today, we are holding the opening ceremony of the first peony Pavilion overseas. It is not only a practical activity in response to President Xi Jinping's proposal in 2015 to jointly commemorate the two great literary masters of China and the UK, but also a concrete embodiment of china-UK cultural exchanges and a symbol of the friendship between Fuzhou and Stratford.

As an important carrier of foreign cultural exchanges between Fuzhou Municipal Party Committee and Fuzhou Municipal government, Mudan Pavilion carries the sacred mission of profound Chinese culture and rich international cultural exchanges and integration, and its reproduction has been highly valued by the main leaders of fuzhou Municipal Party Committee and municipal government. Xiao Yi, the secretary, Zhang Hongxing, the mayor, made instructions on the reproduction and gave instructions to the sample making in person. ZhongYang construction group had the opportunity to become a bear the cultural mission builder, after undergoing construction tasks, are honored and stress, elaborate organization, design and construction team of employees to select the best reference in fuzhou woodcut of tang xianzu museum collection of ancient books, embodying Chinese jiangnan garden pavilion, light and elegant style, combined with the fuzhou architectural features, with the spirit of meticulous, keep improving the craftsman duly completed construction tasks and name it with good quality. 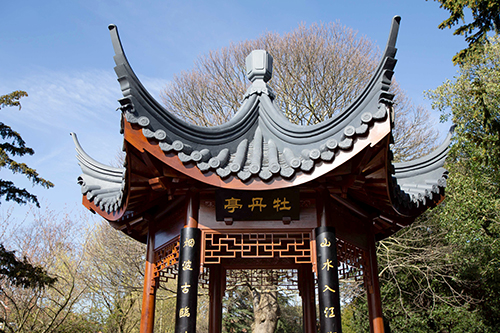 The first overseas Peony Pavilion (UK) project covers an area of about 10 square meters and is about 6 meters high. The main part is wooden structure. The group has made the components in advance in China and shipped them to the UK for formal installation after trial assembly and qualified acceptance. All the components of the Peony Pavilion, including every stone, wood and tile, were transported from Fuzhou to Britain, bearing the purest elements of Fuzhou culture. 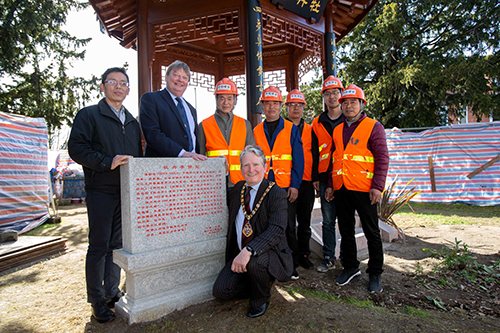 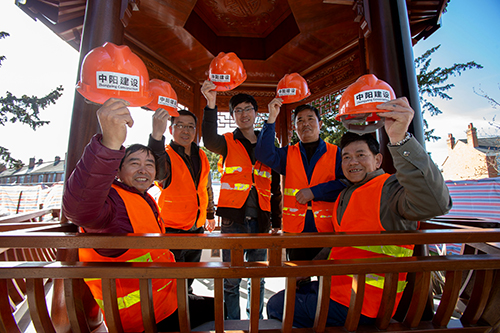 Zhongyang construction group will, as always, actively respond to the call of municipal party committee and municipal political committee, closely follow the plan of entering the international Chinese community with the peony pavilion, and bring one exquisite peony pavilion to all parts of the world, so as to contribute to the promotion of excellent Chinese culture to "One Belt And One Road" and to the world.