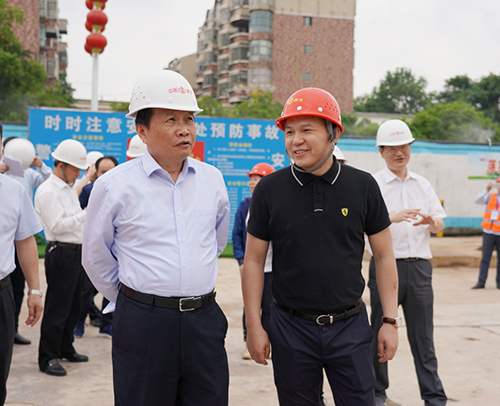 At the project construction site, the project leader reported the progress of the project to Secretary Xiao Yi and his party. XiaoYi secretary for the project planning, progress, safety and civilized construction, gives the full affirmation, inquired about the project problem such as modular structure, and to the project by ZhongYang group put forward the three requirements, one is to strengthen the publicity and training of prefabricated construction, let each participant and the social from all walks of life fully aware of the advantages of prefabricated and benefits; Second, the assembled components should meet the requirements of standardization and precision, further reduce the number of traditional on-site workers, and the construction project should achieve the goals of green construction, ecological pollution and circular economy. Third, it is necessary to strengthen the on-site management of the project, give play to the role of intelligent and digital facilities, and cooperate with and keep close contact with the participants. Zhongyang Group should attach great importance to, carefully organize, scientifically arrange, safely construct, and guarantee both quality and quantity, so as to ensure the timely completion of the construction task of the elderly Apartment project and make it a model and benchmark of fuzhou prefab project. Chen Enbin, President of Zhongyang Construction Group, said that Mr. Xiao took the time out of his busy schedule to visit the project site for inspection and guidance, which was a kind concern and great encouragement to us. Thanks to municipal party committee municipal government's emphasis on ZhongYang group has always been, trust and support, ZhongYang group will seriously implement the instructions of secretary shaw, strictly fulfill the contract requirements, construction is precisely organized as well, in the spirit of excelsior ruban craftsmen to ensure project completed on schedule, and carefully of prefabricated construction experience, to fuzhou construction, innovation and development, transformation and upgrading to provide demonstration of leadership.